This covers a "rebuild" of an existing network, which previously occupied a single sub-net. This is coupled with 10G hardware from Ubiquity and a pfSense router to provide advanced capabilities to various VLANs.

The following were configured inside pfSense which acts as the primary router/firewall designated pfsense-master. 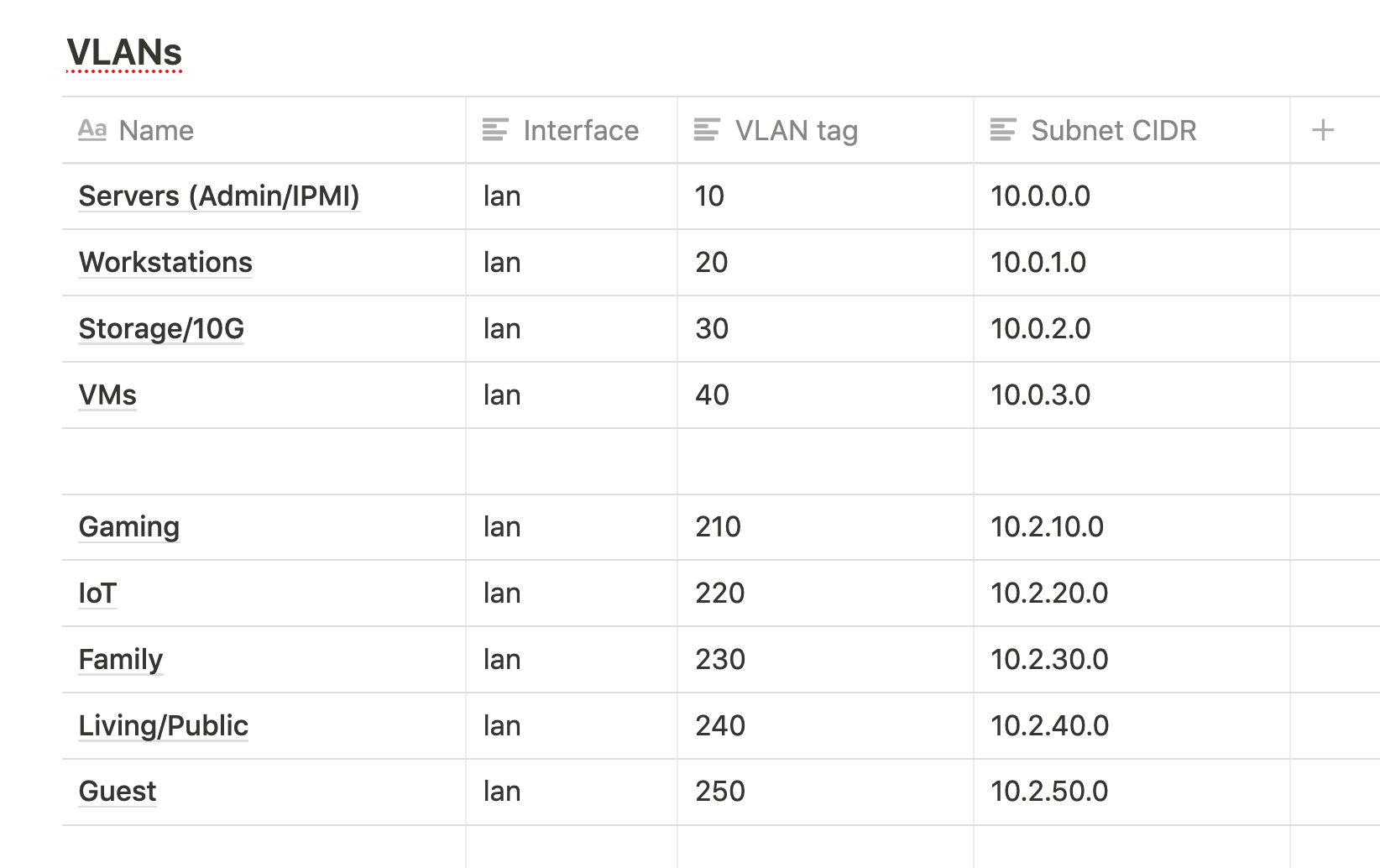 The list of VLANs shown previously, have been setup in pfSense and tied to the ix0 (LAN) interface. 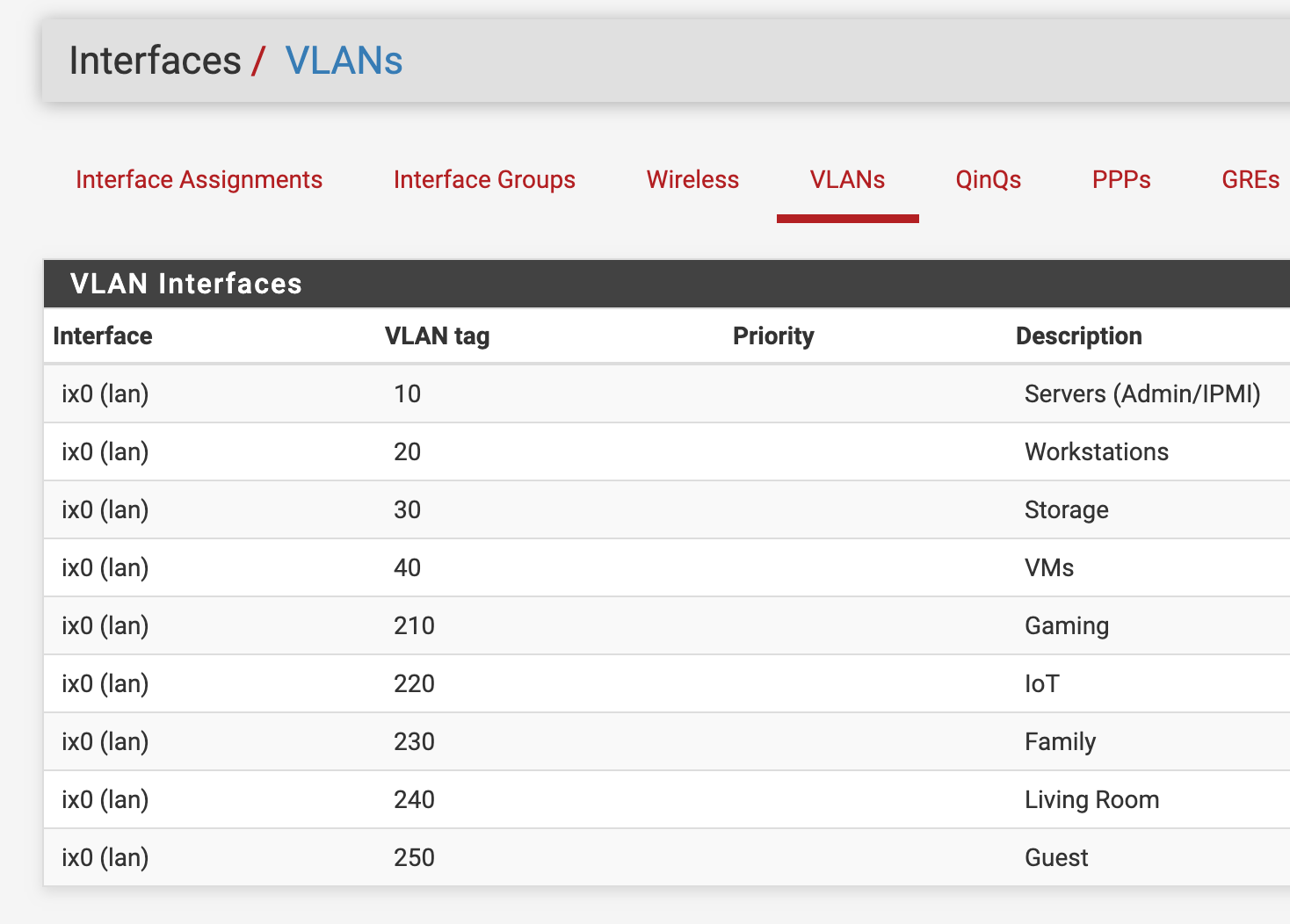 Not all the VLANs are currently in use, so only those that are being used have been added as 'interfaces'. 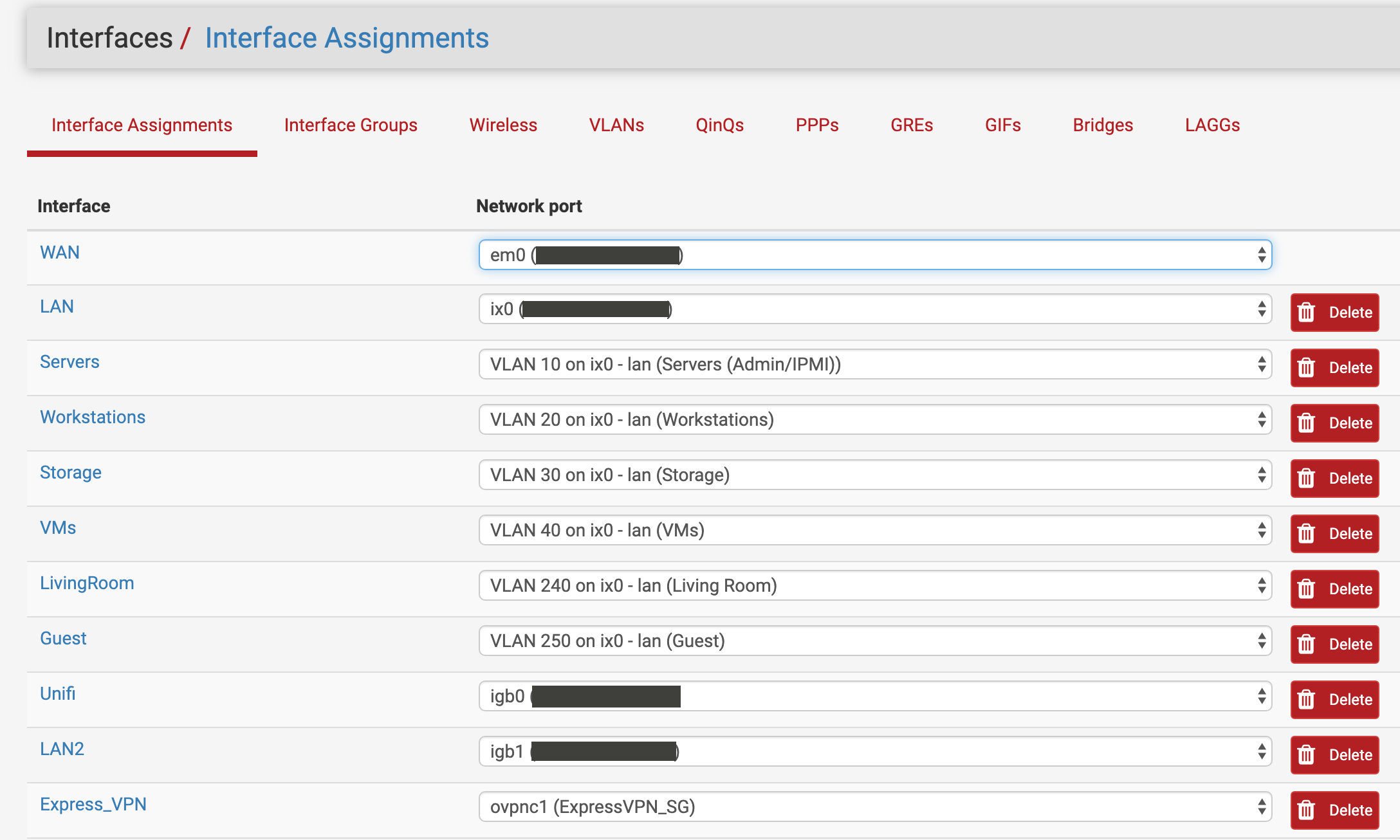 I decided to use a physical UniFi Cloud Key Gen2+ device as this decouples reliance on the FreeNAS backend, to maintain network continuity in the event of a server outage. The Cloud Key is the only device plugged into interface igb0 on the pfSense box, which is a 1G port on the Startech card.

The UniFi component in the network has a couple advantages, primarily having a singular control plane (the Cloud Key). The Cloud Key can either be a physical device, or even hosted in the Cloud (AWS/Digital Ocean etc) or a local VM should the need arise. This central interface is used to manage manipulating VLANs tied to the various switch ports.

This is a view from the UniFi Cloud Key Gen2+

Given this is a homelab, as the name suggests, it is contained within the 3000sqft space within the condo. ISP (WAN) equipment ties into a patch panel in the Utility room, which is right next to the kitchen. The power distribution panel is also located on the same wall (with RCD and other breakers) -- this is where the pFsense box is located, along with the UniFi 16XG (1) switch.

The workstations area is in the master bed room, which also accomodates the home theatre, and gaming consoles. 16XG (2) sits at the ingest point here. 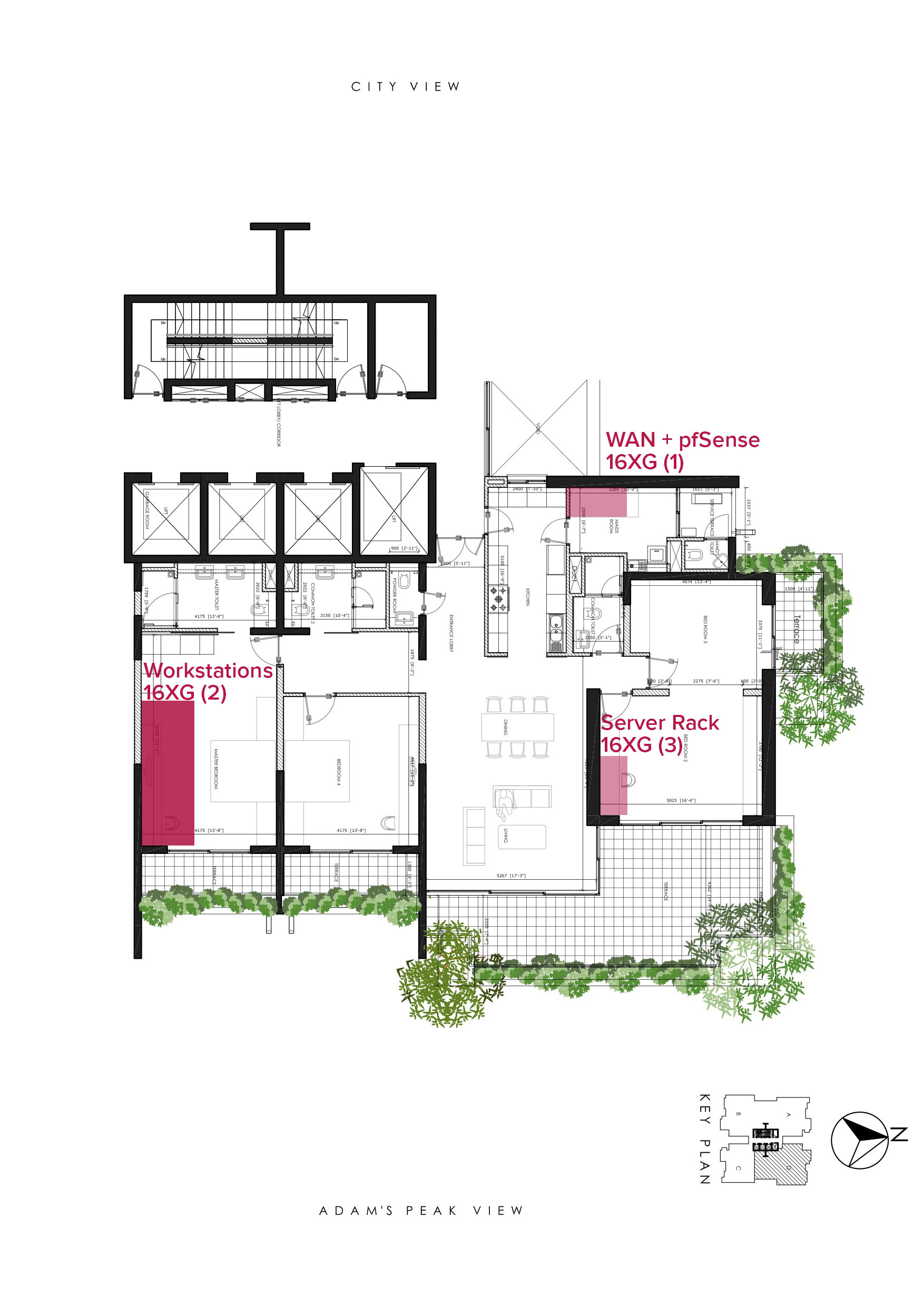 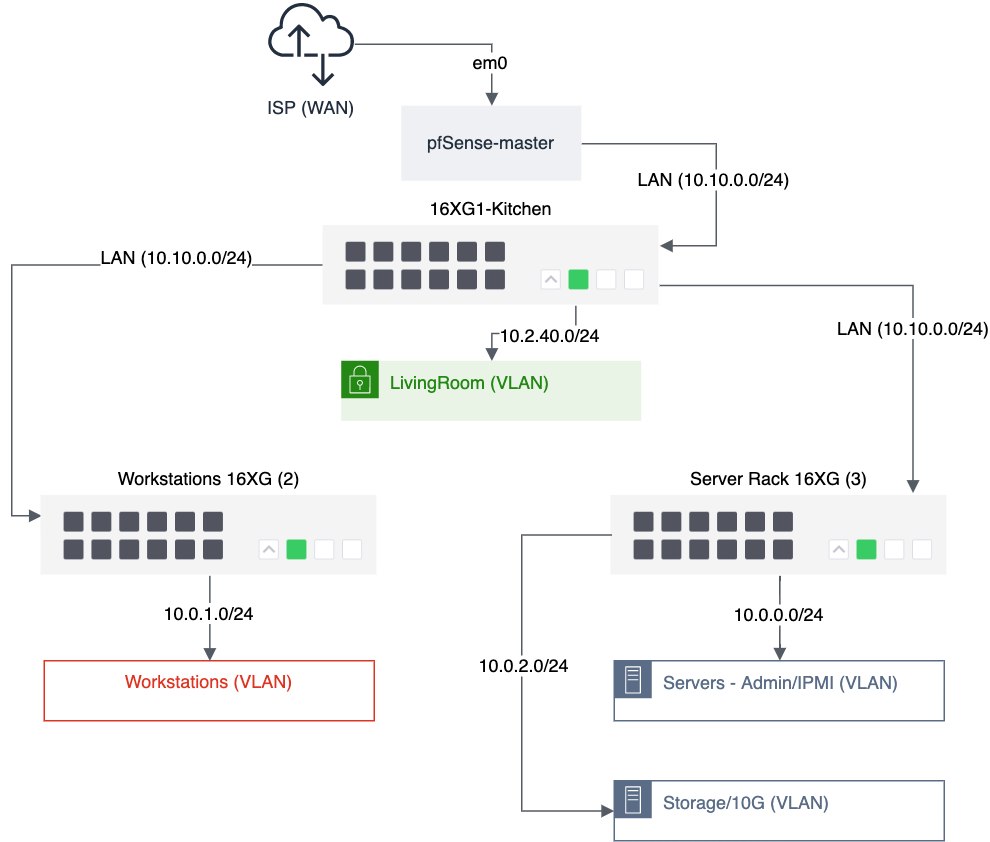 The entire network is designed around a master pfSense firewall/router (henceforth, to be referred to as the router) to accomplish various goals. Rather than purchasing a Netgate device, this has been built with older PC components but most importantly with an Intel X550-T2 10G NIC, to allow cross-VLAN 10G traffic.

Due to the nature of firewall rules, even though the UniFi 16XGs supports layer-3 switching, traffic will still need to pass through the pfSense firewall and therefore needs a 10G NIC.

Beyond the basic OpenVPN setup in pfSense, here are the extra configuration steps involved to tie specific VLANs to route traffic to the VPN gateway.

First, the VLAN net addresses are set for outbound NAT towards the OpenVPN address. These are the two entries at the very bottom. 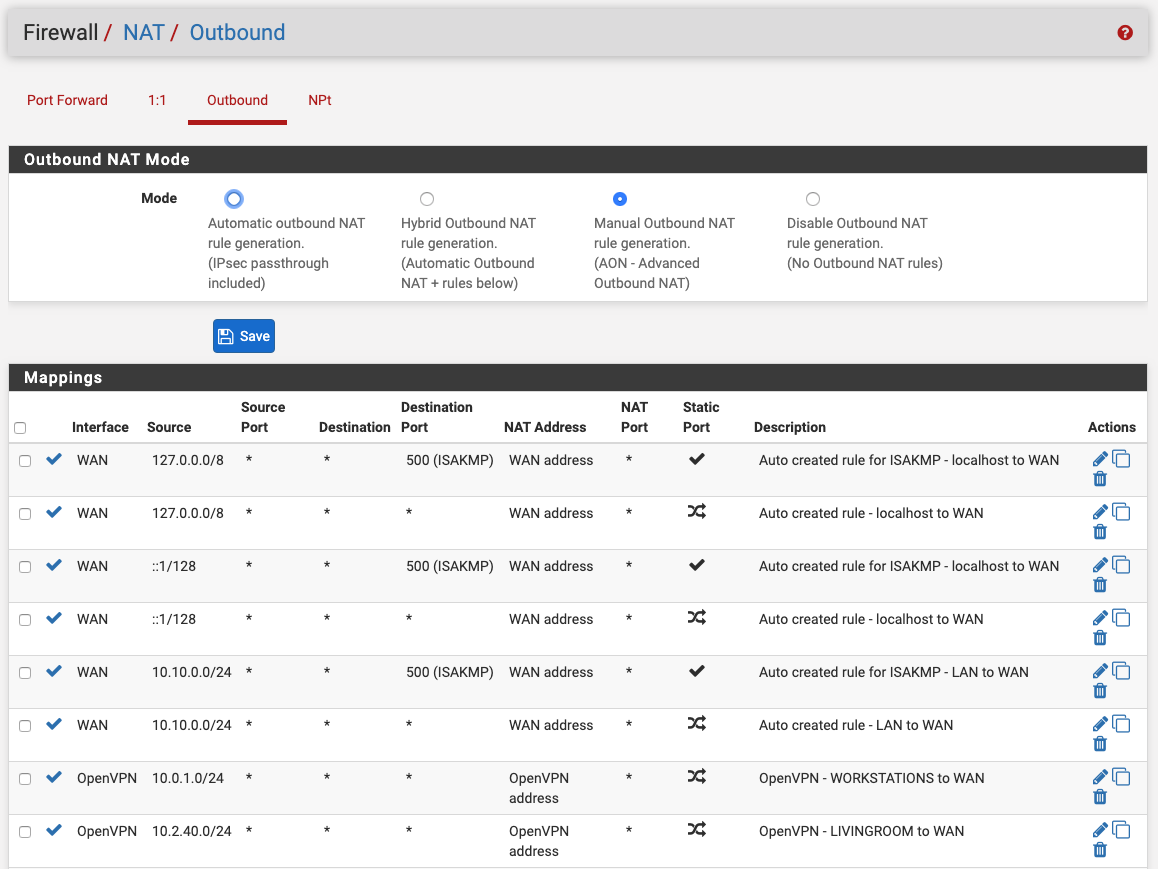 The way the firewall rules work, are typically, the very last rule — one to "open" the firewall to allow any and all traffic out from the WORKSTATIONS net source. Reading bottom-up: each higher rule takes precedance, overriding later rules.

In the descriptions I've used the term 'route', although in reality this is a misnomer since the firewall does not do any routing. However, the rule does allow traffic to ultimately "be routed". 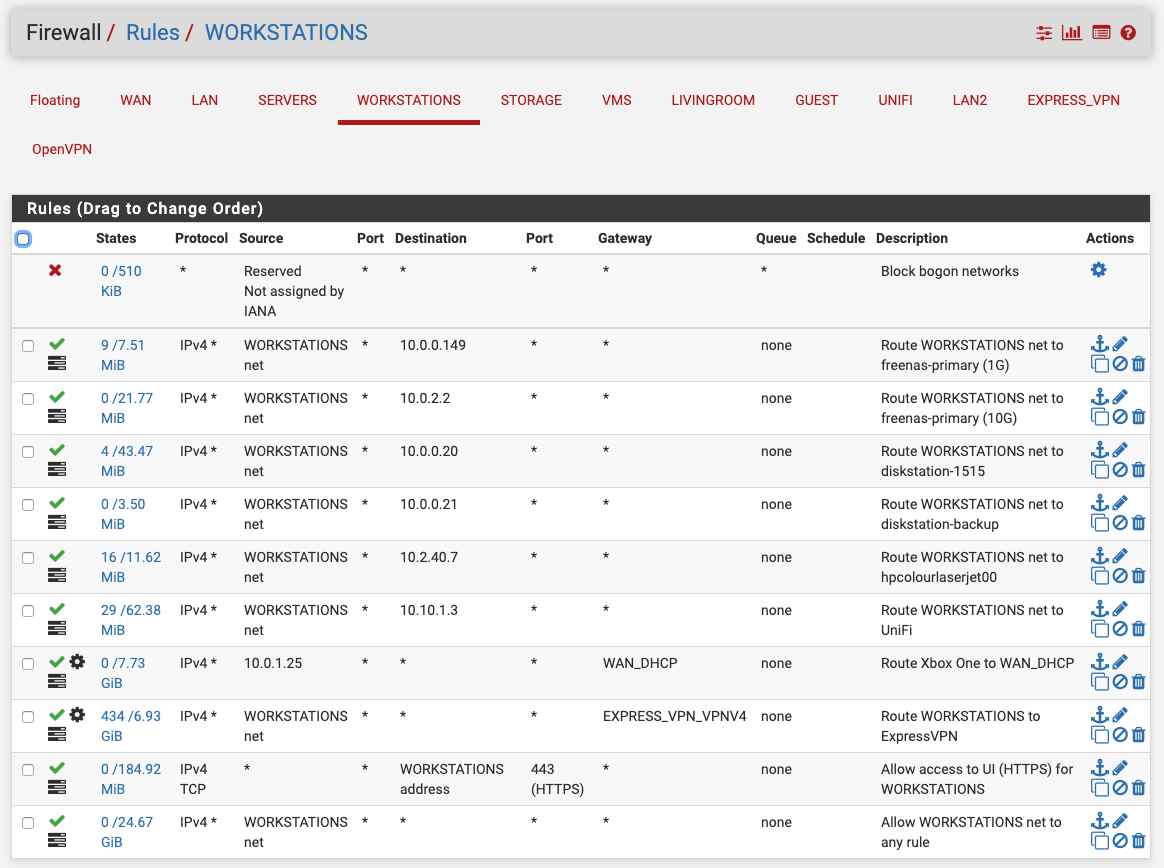 Similar to the previous example, 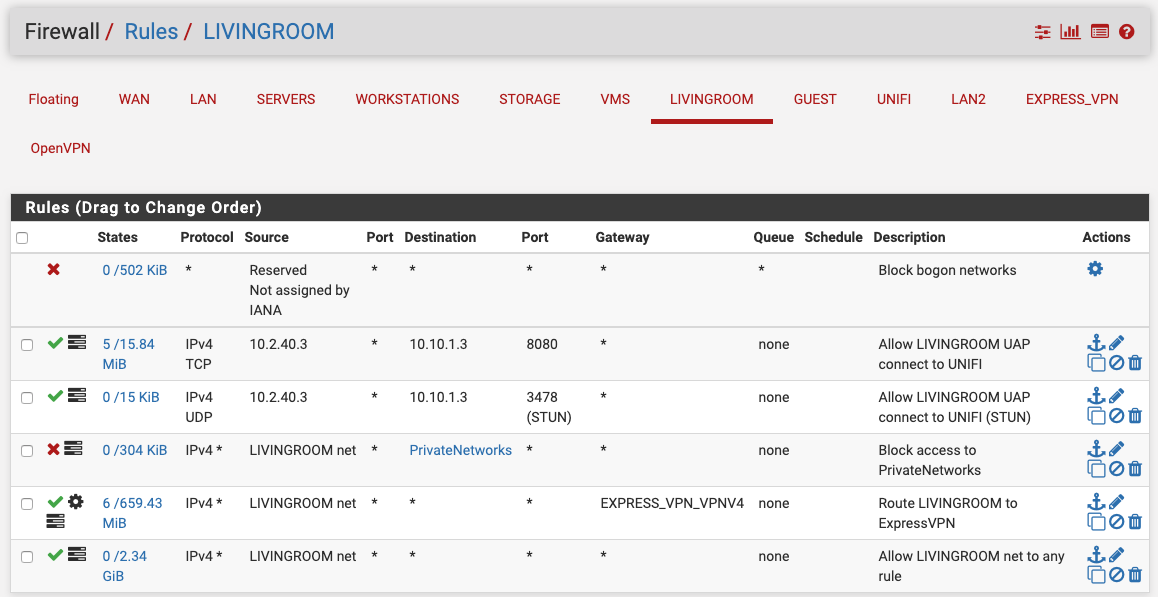